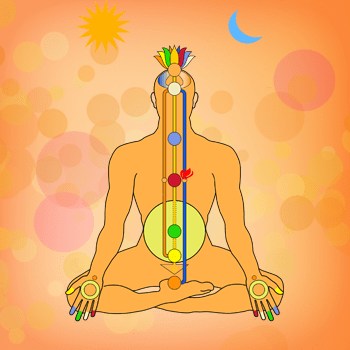 Meditation is a part of yoga. Meditation (dhyana in Sanskrit) denotes the seventh of the eight limbs of yoga in Patanjali’s Yoga Sutras. The eight limbs of yoga are yama, niyama, aasana, pranayama, pratyahar, dharana, dhyana (meditation), and samadhi. Although the Sanskrit word “dhyana” is commonly translated as meditation, it really has no English equivalent.

The main purpose of meditation is to experience one’s own true being/Self — the source of profound peace. Just as in sleep you find new freshness, vigor, and peace, so also you find even greater peace in meditation.

You may be wondering: well, what exactly is the Self? Swami Muktananda (1908–1982), regarded as the Guru’s Guru, explained: “Through meditation, you can know your own inner Self. That one who understands the most secret things inside you is the Self. For example, when you are in sleep there is someone who watches everything, who witnesses everything, who understands everything even though you are asleep. And then when you wake up, that being tells you what you have seen in your dream. That being is the Self, so meditate on the Self.”

In his book, Raja Yoga, Swami Vivekananda illustrated the true Self: “The bottom of a lake we cannot see, because its surface is covered with ripples. It is only possible for us to catch a glimpse of the bottom when the ripples have subsided, and the water is calm. If the water is muddy, or is agitated all the time, the bottom will not be seen. If it is clear, and there are no waves, we shall see the bottom. The bottom of the lake is our own true Self; the lake is the chitta [mind], the waves are the vrittis [tendencies].”

Once you realize your true Self, you’ll identify yourself with that Self – and not with your physical body and mind. Speaking about transcending body and mind, Swami Vivekananda (1863–1902), a great spiritual master of India, said, “The Yogis say that man can go beyond his direct sense-perception and beyond his reason also. Man has in him the faculty, the power, of transcending his intellect even, a power which is in every being, every creature. By the practice of Yoga that power is aroused, and then man transcends the ordinary limits of reason, and directly perceives things which are beyond all reason.”

Meditation gives you the power to be happy even when you are unhappy. “Meditation can transform a person’s character, conduct, and behavior. Through the practice of meditation, lost energy is replenished, memory is improved, intellect is sharpened, and intuition is developed. Meditation removes all worries and tensions of the mind.” (from the author’s book, Building a Noble World)

“Meditation applies the brakes to the mind.” – Ramana Maharshi

“The exhaling breath (prana) should ascend, and the inhaling breath (jiva) should descend, (both) forming a visarga (consisting of two points). By fixing the mind on either of the two spaces between the breaths, one can experience the state of fullness of Bhairava [meditation state].”

Your breath is a simple, natural technique that you can always use to easily reach the meditation state. There are four steps involved in your breathing: breathing in, a gap, breathing out, and a gap. The gap or retention of breath is most significant. It is total stillness, the goal of meditation.

The gap between your in-breath and your out-breath is your inner space, whereas the gap between your out-breath and your in-breath is your outer space. Under the Hamsa technique, the deepest meditation can be experienced by focusing on either of these two tranquil, empty spaces (called sandhi in Sanskrit), during which breathing ceases. In this gap between two breaths, you are a pure being. If you can settle with full awareness inside this gap, you’re in meditation on your true Self – the state of perfect stillness of the mind. For more details on the Hamsa technique of meditation, read the book, Building a Noble World

In meditation, the mind merges into its source, the Self (atman in Sanskrit). Mind is like the ice and water is like the pure Consciousness. Through meditation, one perceives ice as water. There is no need to melt the ice; even when water appears as ice, it is still understood as water.

Meditation happens easily when you are in the company of a good meditator.

Difference between Happiness and Bliss

The happiness derived from each of the five senses – hearing, touch, sight, taste, and smell – depends upon external objects and lasts as long as the object of happiness is around. In other words, when the sense object is gone, happiness is also gone. An example will make this clear. Suppose you are listening to a melodious sound. What happens when the sound is no more? Your happiness from that sound is also no more! Similarly, the happiness that comes from seeing a beautiful form depends on that form. As long as the form is there, happiness is there. If that form disappears, happiness also disappears.

However, the bliss derived from meditation on the innermost being does NOT depend on any external object/outer condition. Bliss independently arises from within the being/Spirit, not from the other/external. Bliss is your very nature.

Do I have to give up my religion to meditate?

The “I” existence is the true and natural state of the innermost Self (called turiya in Sanskrit) — call it Self, Spirit, Being, Consciousness, Awareness, Guru, God, or Aatma in Sanskrit. But when you get down to it, they’re all just different words for the one and the same reality.

If you want to discover, explore, and experience your true Self, meditate. Only through meditation can you connect with your innermost Spirit (atman in Sanskrit).