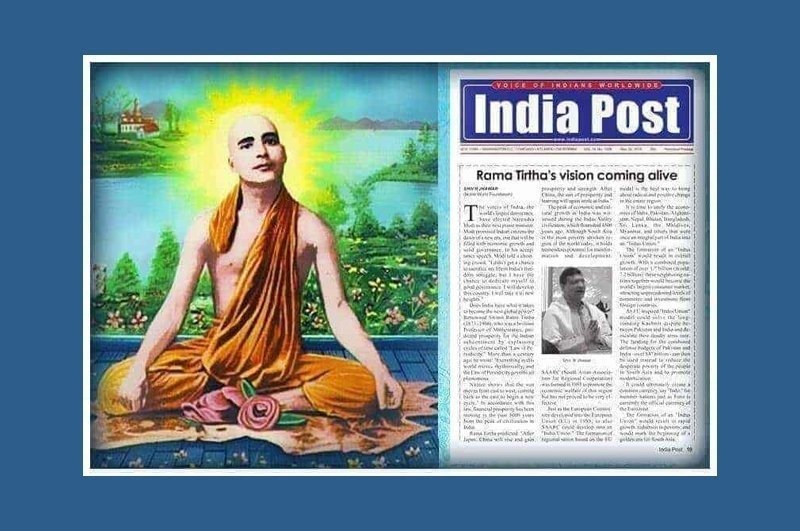 The Law of Periodicity (or Law of Rhythm) states that everything in the universe moves in a circle. The sun moves from east to west, coming back to the east to begin a new cycle.

More than a century ago in 1903, Rama Tirtha (1873 –1906), who was not only a renowned spiritual master but also a brilliant mathematician, claimed the Law of Periodicity applies to countries and their prosperity. In his book, In Wood of God Realization Volume III, Rama Tirtha observed: “Everything in this world ‘moves rhythmically’ and the Law of Periodicity governs all phenomena.”

In accordance with the Law of Periodicity, financial prosperity has been moving in the past 5,000 years from the peak of civilization in India. Prosperity passed over Persia, Assyria, and further west to Egypt; next came the turn of Greece; after that, Rome, and then Germany, France, and Spain; then it traveled to Great Britain. It did not stop there; it traveled further west to America. In the United States, prosperity traveled from New York (“the East”) westward until it reached California (“the west”). Now the sun of prosperity has crossed over the Pacific Ocean with the cycle turning back to the east. In the Far East, Japan became a prosperous country.

In his book, In Wood of God Realization Volume IV, Rama Tirtha stated, “After Japan, China will rise and gain prosperity and strength. After China, the sun of prosperity and learning will again smile at India.”

The peak of economic and cultural growth in India was witnessed during the Indus Valley civilization, which flourished 4500 years ago. Although South Asia is the most poverty-stricken region of the world today, it holds tremendous potential for transformation and development. SAARC (South Asian Association for Regional Cooperation) was formed in 1985 to promote the economic welfare of this region but has not proved to be very effective.

Just as the European Community developed into the European Union (EU) in 1993, so also SAARC could develop into an “Indus Union.” The formation of regional unions based on the EU model is the best way to bring about radical and positive changes in the entire region. It is time to unify the economies of India, Pakistan, Afghanistan, Nepal, Bhutan, Bangladesh, Sri Lanka, the Maldives, Myanmar, and others that were once an integral part of India into an “Indus Union.”